Have an old black and white TV sitting around? I got mine after winning a raffle and it sat around for about a year unused until I decided to hack it up. 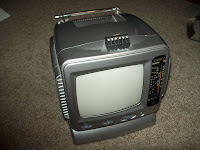 Cathode ray tubes use magnetic deflection to influence the direction of the electron beam. The phosphor-coated screen emits light when it's hit by the beam. There are two electromagnets surrounding the tube - one for vertical motion and another for horizontal motion. As it turns out, these electromagnets are surprisingly easy to hack. There are a few tutorials on instructables for this, but I figured I would make my own anyways.

Isn't it fun when the warning section is as long as the howto section? Before I tell you to open up the TV, let me just say that TVs can be DEADLY if not handled correctly. There are high voltage capacitors in them that can hold a lethal charge for weeks after being unplugged. Don't risk it. They have the potential to severely shock you if you don't discharge them. There are many guides on the internet for this. You have been warned. This may be obvious, but note that the regular channels won't work unless you make some sort of switch or solder the wires back to where they were before. In other words, don't hack hack up grandma's old bunny-ear TV and think she won't notice next time she wants to watch Lifetime.

On to the fun stuff: Open up the TV, and make sure the capacitors are discharged. Now find the magnetic deflectors and there should be 4 wires coming from them (2 for each of the 2 electromagnets). Cut these wires close to the TV's circuit board. Now you have the wires to control the beam. You can do whatever you want with them. I chose to thread them through a hole on the top of my TV hook them up to a connector. Once the TV is put back together, turn it on and you should see a single white dot in the middle of the screen. Don't leave this running unpowered for very long because a concentrated electron beam can burn the phosphor. This effect might even be intensified with larger TV's so be extra careful with those. Now hook up the deflector wires to a music source. I wouldn't hook it up to an iPod due to current issues, but a stereo works fine. It's possible to hook up a single channel to both the horizontal and vertical deflectors, or you can hook up the right and left channels to different ones. Play with the stereo's volume knob to get the deflection amplitude right. The final product should look like this:

Instead of only hooking up music sources and getting that crazy ellipse pattern, try hooking up a sawtooth generator to one axis. This will give you a cool oscilloscope-ish device like this. I bought a sawtooth-generating-IC for this purpose but I never got around to hooking it up to the CRT. Maybe I will soon...