Perhaps my favorite project I've ever worked on is my hydrogen rocket. The craze started when I stumbled upon an article by Dean Wheeler about launching bottle rockets that used hydrogen combustion rather than a bicycle pump for power. I had already finished a reliable hydrogen generator, so I figured this was a good project to put it to use. I didn't have access to some tools and materials that he did, but I found some other solutions that made it work. I'll document my findings here because I believe these types of bottle rockets do not receive the attention they deserve. As far as I know, Dean Wheeler's article and mine are the only two guides about these rockets available.

NOTE: The oxyhydrogen gas described in this howto is often incorrectly called HHO and even Brown's gas. Nevertheless, the term HHO is widely used and it's a good abbreviation. Oxyhydrogen gas is essentially the 2 to 1 mixture of H2 and O2 created by the electrolysis of water. Unlike the ignition of hydrocarbons that also produce CO2, ignition of this gas produces only water and energy, nothing else. It is the purest form of combustion. 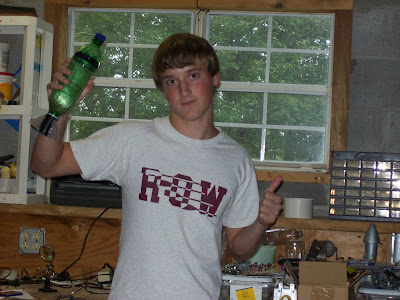 The rocket is separated into three logical sections:

On many bottle rockets the fins are glued directly to the pressure chamber. This is mostly because bottle rocket launchers need access to the bottle's flange to hold it until launch. When I tried this method, I found that the hot glue I used weakened the combustion chamber because it slightly melted it. This never caused any catastrophic failures for me, but I still think it's not a very elegant solution. Anyways, this method is not necessary for hydrogen rockets since there is no pressure until it goes boom, so therefore the rocket does not need to be held in place. I decided to go with a modular fin design instead so I could easily change out fins, and switch them from rocket to rocket. The main body of the fin is made out of a film canister. I hollowed out the bottom with a Dremel so it was more of a pipe than a container. Similarly, I also hollowed out the screw cap so it looks like a ring but still has the threading. This screw cap ring fits nicely in the hollowed film canister, and I glued it in place with hot glue. Next you need to add the fins to the fin body. I bought some spare tupperware containers that I could use to cut out some nice and flat plastic fin shapes. I glued three fins onto the fin body at a slight angle. This angle is critical for gyroscopic stability because it spins the rocket during flight. It truly means the difference between a 50 meter and a 5 meter flight. Here are some pictures of the fins and how they attach to the rocket:

The combustion chamber needs to be able to withstand significant pressure, but only for the short period of time after ignition and expulsion of the water. My combustion chamber is simply a Mountain Dew bottle. Thats all. Other soda bottles will work, but never use water bottles because they often have thin plastic and a flimsy design since they are not built for carbonation. You can decorate your rocket however you want, but there are a few marks that you should add after some experimentation: the recommended oxyhydrogen and air mixtures. You will find out what these marks are for later in the launch process section. Go ahead and mark the "HHO" line 5cm down and the "air" line 10cm down.

The nose cone has several different functions. For starters, it makes the rocket more aerodynamic because otherwise it would be the butt end of the combustion chamber being forced through the air. Secondly, the nose cone adds a place to store a payload. Finally, the nose serves as a crunch zone to absorb the impact of 'landing' without damaging or weakening the combustion chamber. I use the term 'landing' loosely because the landing process is essentially a free fall then a crash. In theory the nose cone could be used to house a parachute system and avoid the 'landing' problem, but I have not attempted this. My nose cone is made out of the top part of another Mountain Dew bottle. I secure it to the combustion chamber bottle with electrical tape. You can store whatever payload you want by unscrewing the top and putting something in there. I found that the rocket can get better altitude if it has some weight (maybe about 50 grams) in the nose cone. If the rocket has no extra weight, the air drag will slow it down quickly. 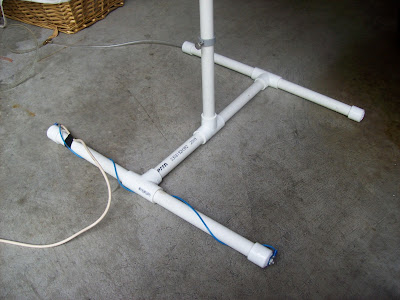 The launcher was the hardest part of the project to build. Dean Wheeler's design was much more elegant in my opinion, but there were some elements that I did not know how to build or did not have the tools to. Here are the parts you need to build the launcher (excluding basic tools like a saw and drill):
The size of the PVC launch tube and supports does not have any exact size, but the smaller the better. You will find out later that the smaller the volume inside the launcher, the less time it takes to get the oxyhydrogen flowing. Also not that the launcher itself does not have to be pressure-safe. Only the combustion chamber and the tip of the launch tube will be under any pressure during launch.

The wiring in the launcher is for the igniter at the top:

Two wires go from two different arms of the base and meet at the end of the vertical launch tube. They are sealed in with a fat blob of hot glue. These wires can provide a source of ignition in two ways. The easiest way for me is to just get a tiny steel strand from an SOS cleaning pad to act as a fuse that burns out:

Another source of ignition is using a gas grill sparking igniter that can be found at a hardware store. I found that these don't work well with long and thin wires because the spark jumped within the wire instead of at the end where I wanted it. If you want to use this method, which in theory is easier and more reliable, pick up some heavily-insulated wire. You might be wondering about the purpose of my ring terminals. They are just an airtight way to connect the external wire to the wires on the inside. I drilled a hole through two PVC end caps for both of the connections. To make a connection, I got a bolt and first threaded the external ring terminal (wire already crimped, obviously). Next I added the actual PVC end cap, and finally the internal ring terminal. A nut holds everything tightly together and keeps it airtight. Add some rubber as an extra layer in between for an even better seal.

I'll admit the inside is not a pretty sight after 2 years. This brings me to another point: use stainless steel whenever possible.

The tubing is nothing crazy. The tube just goes right into the launcher and the gasses are pushed all the way up to a tiny hole drilled on the side of the vertical launch tube:

The best method would be to hook the tube directly to that tiny hole. This would avoid having all that dead space between the tube end and the hole, but I couldn't think of a good way to do it.

Pretty self explanatory. Just cut a pipe whose inner diameter is just greater than the launch tube's outer diameter, and put a screw in it. This holds the rocket at the right height until blast off.

To calculate the temperature and pressure after combustion, use this thermodynamic model. The most comprehensive simulator for water rockets I've found is here. Help files located here. It was made in the stone age of DOS but it works nonetheless (plus it gives me an excuse to use my Windows VM). Simulation is good because it can help you find the optimum water to gas ratio. It also gives you some fun stats: According to the model, my rocket has a max speed of 56m/s (125mph) and and a max acceleration of 2472.5m/s^2 (250Gs). Don't put your astronauts in this one!

Without a parachute, the rocket darts back to earth at a surprising (and somewhat intimidating) velocity. I found that if it fell through a tree or landed wrong, one of the fins could break off. So one innovation I made was to replace the rigid hot glue join for the fin with simply tape so it would be flexible and easily replaced. Using tape is definitely easier, but hot glue is probably still the optimal join.

If you need a demonstration of things that can go wrong, see this video. The guy managed to cover just about all of them in one launch attempt. I don't have much room to talk since my first launch went no better than his did (see picture below). Just keep in mind that getting a working design can be difficult and will certainly need some tinkering to fix problems:

If your rocket blows up, don't be discouraged. It happened to me on my first launch attempt (pictured above). There are two main problems that can cause an explosion rather than a launch. First of all, make sure the oxyhydrogen is diluted with air. If you do not dilute the mixture, your plastic rocket will explode for sure. Secondly, you could be using a bottle not built to withstand pressure. Flimsy water bottles like the one above will fail very easily. My first launch attempt had both of the problems described above.

I'm sure I haven't covered everything in this article so if you have any more questions just post them in the comments. I'll get around to answering them as soon as possible. Peace out and happy rocketeering!