It took me many many tries to design a reliable and cheap way to produce the hydrogen I needed. There are literally tons of videos of other people's designs on YouTube (just search for 'HHO generator', 'electrolysis', or 'hydrogen generator'), but some of the parts and processes were just out of reach for my budget. Some used custom-cut steel that was expensive to order. I finally found an interesting method that used off-the-shelf wall plates that were stainless steel. This video was the one that really gave me the idea. sirHOAX does a lot of great work with generators like these.

Anyways, stainless steel is a must otherwise you will end up with a brown soup of nastiness (iron oxide) after just a few minutes. I picked up a few of these wall plates from Lowes. I used a blank wall plate, but I also found a double-sized wall plate that would also work if someone wants more output from their generator. As soon as I got these I used a reamer to enlarge one hole per wall plate (the hole where the screw normally fits through) to about 1.5-2cm in diameter. This is so that I can bolt the plates together. One bolt for each terminal. The reaming process was long and rubbed blisters on my hand, but I managed (it was nowhere near the work I put into hand-sawing my wind turbine blades later). I had three wall plates in all, and one terminal happened to get two wall plates while the other got one. It doesn't really matter that much.

After reaming out holes, make sure to sand the plates so there is maximum surface area for electrolysis to take place. Then assemble the plates like sirHOAX does in the video. As with all designs, you will probably have to improvise since not everyone has the same materials. Here is how my plates turned out:

As you can see the washer I used has become very corroded, and eventually it will need to be replaced. If possible, use stainless steel for every metal part of the generator. Also shown in the above pictures is the tupperware container I mounted them in. Use the containers that have locking seals. If you use a normal container that just presses on, you will have leaks and the whole top might even pop off. Here's a closeup of how I mounted the plates: 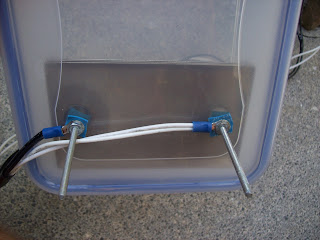 I cut off a square of rubber band and poked a hole through it. I then put this in between the lid plastic and the nut. This ensures a watertight seal even though there are two holes in the lid. I also drilled a hole in the top of the lid to provide a port for the HHO. Ideally there would be one of these nozzles that hoses can attach to, but I didn't have one so I just force the clear hose through the hole: 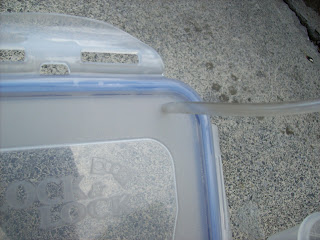 You can use ordinary tap water for this, but if you need more production you can add baking soda as an electrolyte. I normally put two teaspoons of baking soda per liter. Salt also works but it precipitates this nasty green stuff. Don't use it. Next, just hook the generator up to a power supply suitable for your generator. Here is my setup before being switched on: 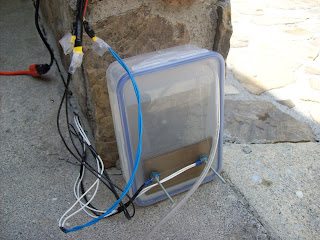 Flip the switch on the power supply and out comes a stream of HHO (perfect for igniting): 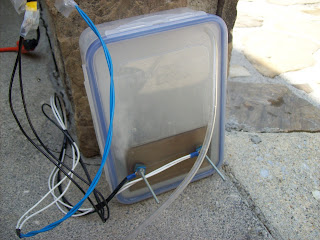